The summer months can often mean an influx of unwelcome guests. No, we're not talking about visiting relatives. We're talking about ants. And if you're not into chemical sprays (which rarely seem to work anyway), it might be time to try a homemade approach. Here are 8 ways to get rid of ants using common items available right in your cupboards. 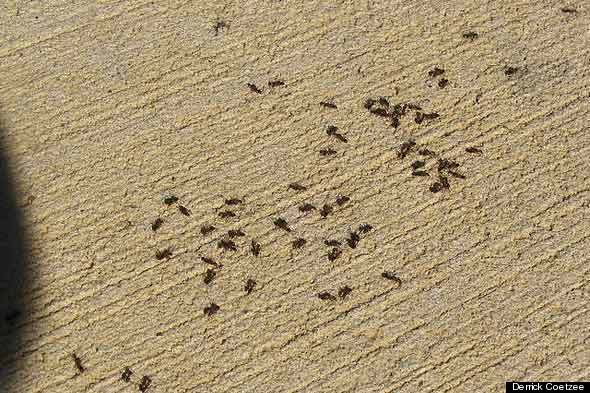 In my old apartment, I lived below a frat guy who never had time to clean his place. I didn't really discover this until I had to ask him for a flashlight one day. When he opened his door, an empty bag of potato chips rolled across the floor like a tumbleweed. He was living in a wild west of his own bachelorhood.

The big problem came when he moved out. The ants that had been feeding in his apartment, now without a food source, started to crawl in through the odd crack in the ceiling, the tops of the windows...really anywhere they could. So, I had an ant problem. Chemical sprays seemed to work for a little while, but were a temporary fix. It would kill the immediate invasion of ants, but not the second and third fronts. I also didn't like the idea of my house carrying the scent of eu de Raid (or the idea of my pets or guests breathing in the fumes).

I kept a list of the different natural methods I used to get rid of ants, all culled from internet message boards and advice-giving friends. Here's what worked...and what didn't:

- Mint leaves. Did you know that an ant can carry up to 50 times its own weight? Oh yeah, they can totally carry crushed mint leaves too. The thinking here is that the ants object to the mint's scent compounds...but maybe mine wanted to make mojitos in their little ant colony? I don't know.
- Cayenne pepper. The capsaicin in cayenne pepper is an irritant to ants, making them stay away. So, I sprinkled cayenne pepper around a particularly active spot near the floorboards. This worked for a day, but then Roscoe (my cat) tried to "clean up" the pepper. I had to stop this little experiment.
- Baby powder. The cornstarch in baby powder (I generally don't buy the kind that contain talc) is another irritant to ants. Like the cayenne pepper, I sprinkled it around a particularly active area and waited. The ants did appear to go away, but at least two guests had thought I had spilled flour and tried to helpfully sweep it up.
- Cornmeal. This is going to sound a bit gruesome: Cornmeal makes ants explode. They take the grains home, eat them and then presumably drink some water. The grains expand inside the ant, and then boom, tiny fireworks. Did I see this happen? No. There was remarkably less cornmeal by the end of the first day, but the ants kept returning to bring home more cornmeal. I had effectively made an ant feeding trough. Forget this idea.
- Cinnamon. The ants walked around any area that had been dusted with cinnamon, but didn't avoid the area entirely. (My house did smell lovely, though.) Many people swear by this one, so I'm wondering if they're using a really strong, fresh batch of ground cinnamon. But for me, no dice.
- Bay leaves. Like the issue I ran into with cinnamon, the ants walked around any area that had a crushed bay leaf near it, but ultimately did not avoid the area entirely. Again, I'm wondering if fresh bay leaves would be more effective (since they do smell stronger, and ants allegedly hate their scent) than dried.
- Vodka. A 3-to-1 ratio of vodka to water, poured into a spray bottle, was recommended to me by a friend. I sprayed this all over the kitchen. While it did kill the ants, the kitchen also smelled of vodka, giving guests the wrong impression.
- Dish liquid and water mix. This is, hands-down, the most effective way to get rid of ants. I used about two tablespoons' worth diluted in a pint of water. Transfer the solution into a spray bottle. Spritz near windows, doors and cracks, but don't wipe it away. This apparently destroys the scent trail that alerts more ants to come on down. Then, spray any roaming ants with this solution to, well, kill them (and okay, then wipe the ants away). It works surprisingly fast.