The good news is that high blood pressure can usually be reversed naturally, specifically through lifestyle changes and consuming foods that lower blood pressure.

Even though it’s closely related to dietary and lifestyle habits, many people try to rely on medication alone to solve their blood pressure problems.

One of the most popular prescription drugs for hypertension, Lisinopril, names side effects including “blurred vision, confusion, dizziness and unusual tiredness or weakness.”

To me, that sounds pretty undesirable for something you can easily correct with a high blood pressure diet and lifestyle changes. In fact, I’m going to tell you about 13 foods, including everything from snacks to juice to herbs, that have been scientifically proven to lower blood pressure.

While most traditional fruit juices are laden with processed sugar and practically devoid of useful nutrients, 100 percent pomegranate juice is actually one of the healthiest juices on the planet.

It has also been tested for its ability to reduce blood pressure in patients with diabetes, patients undergoing kidney dialysis and those with carotid artery disease, all with the same successful results. (12, 13, 14)

We’ve all known for a long time that spinach is a crazy healthy food and helps seriously reduce disease-causing inflammation. The awesome antioxidants it contains land it on this list of foods that lower blood pressure. (15, 16)

A subject of relatively new research, coriander has been used traditionally for years to treat a number of conditions.

In 2009, a revolutionary study began attempting to define what exactly coriander can do. Researchers found that it exhibited several positive benefits, including a hypotensive (blood-pressure lowering) effect. (17)

They’re not just a snack anymore; pistachio nutrition is no small thing when it comes to heart health.

Nuts tend to have a positive effect on lowering blood pressure as a group, but when compared to other types of nuts, pistachio came out on top. (18) Pistachios are on the list of foods that lower blood pressure even for those suffering from high cholesterol. (19)

Beet benefits span a variety of items, from maintaining a healthy sex drive to blood detoxification. Its juice, referred to as beetroot juice, has been used since the Middle Ages to treat a number of conditions.

However, just a folk remedy this is not — beetroot juice has been the subject of extensive scientific research for its health benefits, not least of which its ability to lower blood pressure.

In overweight and obese subjects past middle age, the effects are not as noticeable, at least in the short term. (24, 25)

Since Bible times, olive oil has been regarded as one of the healthiest staple foods, especially in areas such as the blue zones. It’s a common part of the Mediterranean Diet, a well-known diet associated with longer life spans and less instances of common diseases (like heart disease). (26)

This antioxidant-rich, delicious cooking oil can be used in so many recipes, and that’s a good thing because it’s a food that lowers blood pressure. (27, (28) A 2015 scientific review conducted in Spain even found that “virgin olive oil significantly reduces the risk of cardiovascular disease clinical events,” suggesting that it’s good for the heart on a much broader level than just high blood pressure. (29)

Olive oil is one of the healthy fats you definitely want to include in your regular diet.

Perhaps the most controversial item on my list of foods that lower blood pressure is dark chocolate. One reason for the controversy is related to how commonly dark chocolate is available combined with a huge amount of sugar.

When you’re able to find dark chocolate that isn’t totally soaked in unnecessary sugar, enjoy it. It’s great for your heart.

There are some small studies that disagree, but when tested on a large scale, dark chocolate is consistently correlated with a lowered risk of high blood pressure. (30) This is most significant in larger populations with metabolic syndrome, a cluster of conditions associated with dangerous health issues, including stroke, diabetes and heart disease. (31)

The best results when working to lower blood pressure by eating dark chocolate will always come from chocolate high in flavonols (sometimes called “flavonoids”), specific phytochemicals that act as antioxidants. (32, 33) Even though this isn’t something you’ll find on a label, you can get close by looking for organic chocolate that lists a high amount of “cocoa solids” (somewhere close to 80 percent is best).

Possibly due to the beneficial omega-3s found in flax seed, it ranks on this list of best foods that lower blood pressure. (34) It can even lower blood pressure in patients who have already developed peripheral artery disease, a common condition hallmarked by fatty deposits and calcium buildup within artery walls. (35)

The best results have been found when flax seed is consumed regularly for over 12 weeks. (36) Scientists have been so impressed by these transformations that a 2013 study in Canada said that “flaxseed induced one of the most potent antihypertensive effects achieved by a dietary intervention.” (37)

You probably know by now that you burn more calories eating celery than you consume, but did you know that it’s good for high blood pressure? Every time you eat celery, its nutrients help to keep high blood pressure in check. (38)

It’s interesting to note that at least one study found that cooked celery had more blood pressure-lowering potential than raw. (39)

The best hypotensive effects of the tomato will be found when eaten raw.

Trying to make sure you get a wide variety of colors in your diet? You’ll probably enjoy trying out the vibrant purple potato. Loaded with antioxidants (including anthocyanin pigments that give this sweet potato its color), purple potatoes help significantly lower blood pressure. (43, 44)

With the exceptions of olive, coconut and sesame oil, I generally try to stay away from vegetable oils. However, the oil of sesame seeds has been popular in ancient medicines for millennia and has some serious heart-healthy properties.

Sesame seed oil lowers blood pressure and helps protect against cardiac hypertrophy, a thickening of the heart muscle usually caused by high blood pressure. (45) A lot of research focuses on sesame oil’s ability to increase potassium levels while decreasing sodium in the blood. (46, 47)

These effects seem to apply in both the short and long term, so cooking with sesame oil on a regular basis may help protect against high blood pressure in the first place. (48)

Another slightly controversial item on my list is hibiscus tea. This tart herbal tea contains a large number of antioxidants and has been found to effectively decrease blood pressure, including in patients with diabetes. (49, 50, 51)

Unlike most of the foods mentioned above, there are a few minor risks to consider when consuming hibiscus tea, although it’s generally recognized as safe. There is some evidence that at extremely high doses, hibiscus tea could potentially interfere with some liver functions. (52) 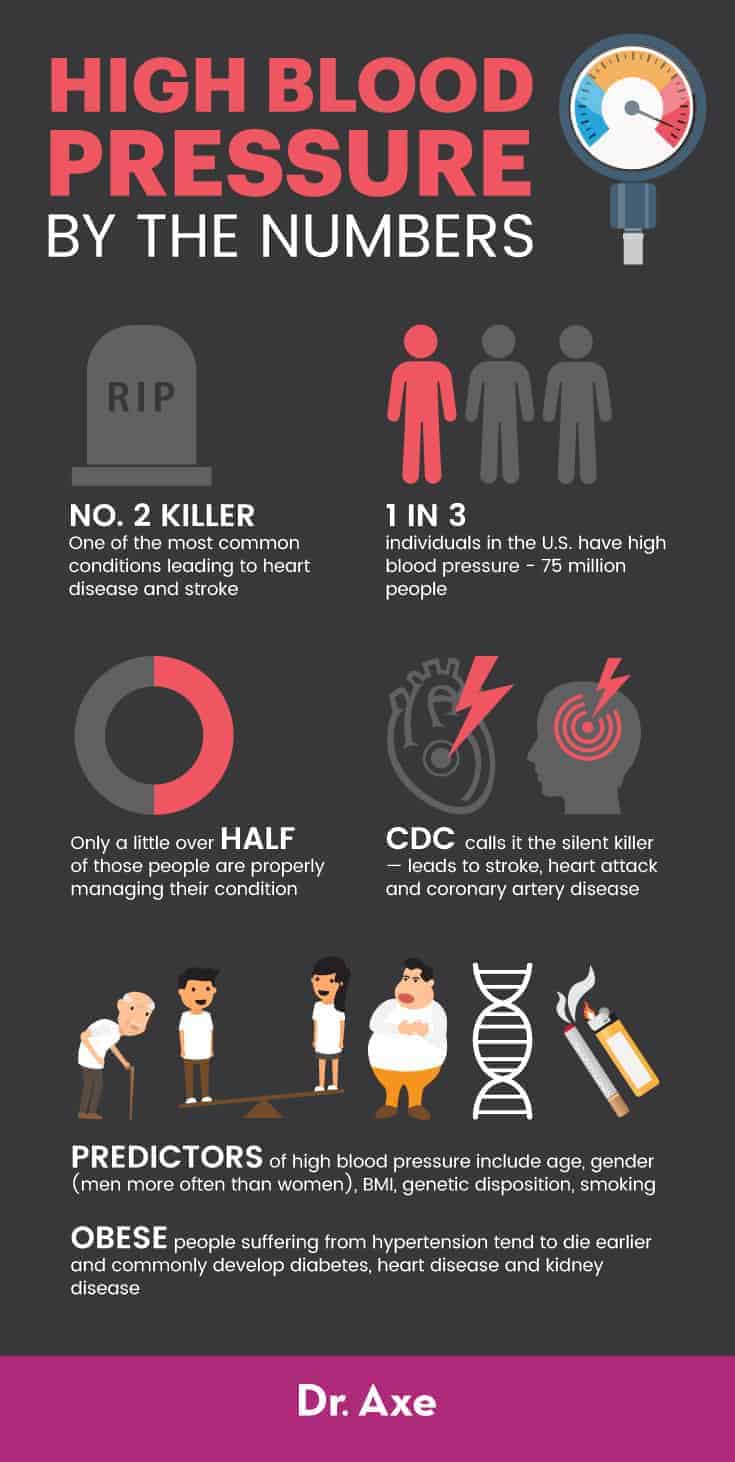 Other Ways to Lower Blood Pressure

There are a variety of natural ways to lower blood pressure in addition to diet and exercise. For instance, there are several essential oils associated with a reduction in blood pressure, including: (72)

If you’re interested in supplements that can help you reduce blood pressure, I would try cod liver oil. This anti-inflammatory powerhouse has incredible health benefits and can help to effectively lower blood pressure. (76, 77)