Research shows that adults taking red clover often experience overall improved satisfaction regarding many different “symptoms of aging” compared to placebos — and even conventional medicines too.

Over the past several decades, red clover (RC) has come to be known as a top herbal supplement. What are the benefits of taking red clover?

Considering red clover is generally safe for most people and may work relatively quickly — potentially leading to positive changes in libido, mood, sleep, skin and bone health within several months of use— it’s worth a try.

What Is Red Clover?

Red clover (Trifolium pratense L.) is a plant in the Fabaceae botanical family. It’s used to make an herbal supplement that may have some immune-boosting and positive hormonal effects, especially for postmenopausal women.

The red clover plant actually belongs to the legume plant family (just like peanuts and beans), which is why animals often graze on it in the wild. While historically the RC plant has been taken in the form of tea and tinctures, today it’s often used to make extracts, such as the products with brand names Promensil and Menoflavon.

Research suggests RC acts like a natural diuretic, meaning it increases urine production and balances fluid levels in the body. It’s also believed to improve immune function by helping the body get rid of excess waste, mucus (acting like an expectorant) and toxins that can accumulate in the body. Additionally, it may help support functions of the liver, lungs, skeletal system and digestive organs.

According to researchers at the University of Maryland Medical Center, some of the ways Trifolium pratens may help fight inflammation, infections and hormonal imbalances include:

That being said, RC is not a medication and does not work for every person who uses it. There may also be differences in absorption rates among individuals, which effects how well it works.

Does red clover increase estrogen? Red clover benefits are due to its active chemical constituents, especially isoflavones, which are plant-based chemicals that produce estrogen-like effects in the body. The major isoflavones found in red clover include genistein, daidzen, formononetin and biochanin. They closely mimic the effects of natural estrogen that both men and women produce.

Although excess estrogen caused by endocrine disruption is a big concern today for many people, too little estrogen is also problematic.

Along with compounds called coumestrols and flavonoids, red clover isoflavonoids are the main active substances of phytoestrogens, which research has linked to stronger bones in older adults and a reduced risk of developing several types of “female cancers”, as well as support for prostate health in men.

Isoflavones have estrogen-like properties due to activating estrogen receptors. They’re consumed in high amounts in many healthy populations, such as those living in Japan who eat a lot of naturally occurring isoflavones from fermented soy products and other fermented foods.

Certain studies have found there may also be red clover benefits for men, since men with elevated PSA (prostate specific antigen) levels/enlarged prostates who have supplemented with RC extract have been found to experience improvements in liver function, sexual function, and quality of life.

Although it’s not usually taken to provide high amounts of essential nutrients, Trifolium pratens is also a source of many different vitamins, minerals and electrolytes, including calcium, chromium, magnesium, B vitamins, vitamin C and more.

What is red clover good for among women dealing with symptoms of menopause? Isoflavones can have positive effects in reducing symptoms related to estrogen loss — such as hot flashes, night sweats, trouble sleeping, weight gain, bone loss, bone fractures or osteoporosis, cardiovascular problems, and inflammation of the joints.

Study results examining the effects of red clover in in treating menopause symptoms have been somewhat mixed, but many have shown improvements in symptoms within months, without many unwanted side effects.

A report printed in the International Journal of the Society of Gynecological Endocrinology explained that an unexpected result of the Women’s Health Initiative study was that researchers realized most conventional hormone therapy treatments (HT) given to menopausal women come with unwanted side effects and complications, so as a result there’s been an increase in interest in alternative, natural options for providing menopause relief.

One of the most popular uses of RC is treating hot flashes. A 2016 meta-analysis concluded that “red clover consumption may decrease frequency of hot flashes, especially in women with severe hot flashes (≥ 5 per day).”

A random, double-blind study evaluated the effects of phytoestrogens, including red clover isoflavones (80 milligrams a day), on menopausal women compared to a placebo for 90 days. After the initial groups completed its treatment, the women were switched to receive the opposite treatment for a further 90 days to compare results.

The results showed that red clover supplementation significantly decreased the rate of many menopause symptoms such as hot flashes and night sweats, and had a positive effect on vaginal cytology, mean total cholesterol, low-density lipoprotein-cholesterol and triglyceride levels. Cholesterol and triglycerides were only slightly lower compared to placebo, but symptoms were lowered enough to impact the women’s quality of life.

Researchers have found that on average, adult women using red clover extract experience significant improvements in the health of their scalps, hair and skin within 90 days of use, including lowering signs of aging, collagen loss and hair thinning.

Another study published in Obstetrics and Gynecology International found that Trifolium pratens could help reduce symptoms like low libido, mood, sleep and tiredness.

Research demonstrates that the most common type of osteoporosis is the type associated with ovarian hormone deficiency during menopause. Thus, RC makes a great addition to any osteoporosis diet.

A woman’s risk for developing osteoporosis goes up during menopause because estrogen is important for bone mineralization. Pre-menopausal women with low estrogen levels or low bone density may also benefit from RC supplementation.

Studies have shown that red clover benefits arterial health, reduces the risk for atherosclerosis (hardening or thickening of the arteries), boost circulation, can help manage high cholesterol and may even help prevent coronary heart disease.

While most studies examining RC’s effects on heart health have been conducted using animals and not humans, research suggests that RC may help protect against heart disease thanks to its isoflavones, which can increase HDL “good” cholesterol, keep blood clots from forming, and produce more flexibility in arteries.

4. May Lower the Risk for Certain Cancers

Researchers have found that isoflavones in Trifolium pratens seem to help stop cancer cells from multiplying or growing and also might be able to induce apoptosis (self-destruction of cancer cells). The types of cancer most likely impacted by RC use include those related to hormonal changes, such as prostate, breast and endometrial cancer.

On the other hand, there’s still more to learn about how RC and isoflavones are connected to natural cancer prevention. At this time, experts indicate there’s still some unknowns when it comes to understanding all of estrogen’s effects on breast cancer, so people with a history or high risk for breast cancer are advised not to use RC until more research is conducted.

There’s some evidence that isoflavones may be helpful for slowing down signs of aging on the skin, as well as lowering inflammatory skin conditions like psoriasis, eczema and various rashes.

Studies over the past several decades show that RC’s effects on estrogen levels give it most of its anti-inflammatory, UV protective, collagen-boosting and wound-healing potentials. In older adults, RC reduces the effects of skin aging induced by estrogen deprivation and can help boost collagen production.

Other reports have shown that red clover benefits for skin include clinically treating wounds or burns and improving skin elasticity, thickness and hydration — plus possibly reducing the appearance of pore size and signs of aging.

Is red clover good for hair growth? According to some research, it’s been shown to boost the health of not only skin follicles, but also the scalp and nails, too. While studies are limited, some findings suggest that applying products containing RC extract to the scalp might increase hair growth in people with hair loss (alopecia), especially postmenopausal women.

Trifolium pratens extract and tea is used for prevention and treatment of respiratory conditions like whooping cough, colds, asthma and bronchitis. It may help to reduce discomfort during illness, and has the ability to loosen phlegm.

Because it can potentially calm bronchial spasms, improve sleep quality, and help flush extra mucus and fluids from the respiratory system, it’s beneficial to try as soon as you feel an illness coming on. 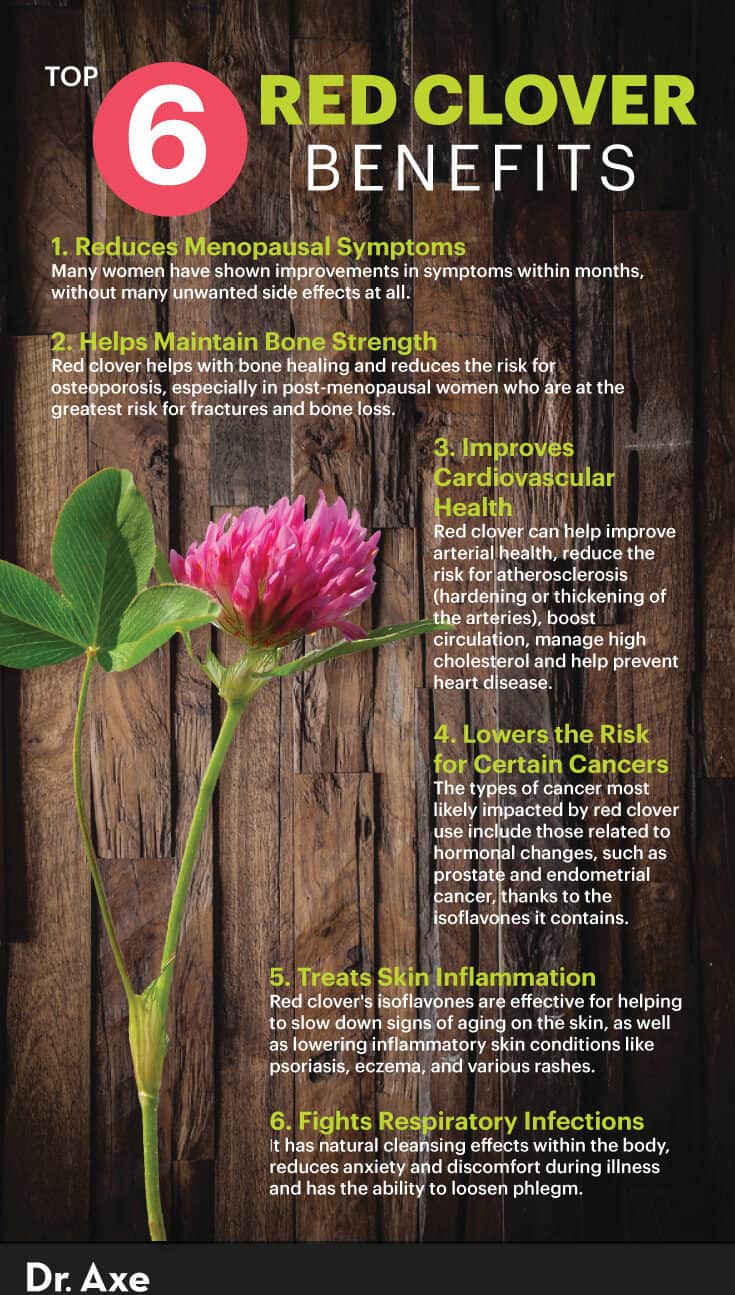 Red clover supplements can be found in standardized extract form or capsules. Isoflavones in RC supplements are very potent, so much lower doses are needed than when consuming the whole herb.

Clinical trials, including those done with postmenopausal women, have used varying red clover dosages to safely produce positive effects. While dosage depends on what you’re using it for, recommendations are as follows:

How to make red clover tea:

What are the side effects of red clover? Because red clover contains isoflavones that mimic the effects of the hormone estrogen once they enter the body, the safety of RC in patients with breast or endometrial cancer remains controversial. It’s possible that this herb may complicate these conditions and interfere with treatments, or even worse potentially raise the risk for them developing in the first place.

However, a 2013 systematic review concluded that “Soy consumption may be associated with reduced risk of breast cancer incidence, recurrence, and mortality… Soy intake consistent with a traditional Japanese diet appears safe for breast cancer survivors.”

Some people report experiencing estrogen-like side effects when taking RC, such as bloating, breast tenderness, changes in menstrual periods, mood changes and headaches.

On the other hand, red clover appears to be neutral, safe or even beneficial for most. Early evidence shows that taking a specific RC extract (Promensil) daily for one year did not increase breast tissue density or raise breast cancer risk, nor did it seem to raise the likelihood of developing cancer of the lining of the uterus (endometrial cancer).

There’s some evidence that isoflavones can contribute to reproductive problems in certain animals. Several studies have linked high amounts of isoflavones to reproductive failure and complications, such as liver disease due to estrogen-like activities. However, in smaller doses in appears to be safe for most adults who are not pregnant, breastfeeding, or at a high risk for breast cancer.

RC might also raise the risk for certain bleeding disturbances due to its blood-thinning effects in people who have abnormal blood clotting or who just had surgery. Use of this herb should be avoided in these cases.