Have you ever heard of moringa before? Although this plant was initially discovered for its beneficial properties thousands of years ago, only recently has moringa (sometimes called the Ben oil tree) become known as one of the most impressive herbal supplements to hit the holistic health market.

In fact, in 2008 the National Institute of Health called moringa (moringa oleifera) the “plant of the year,” acknowledging that “perhaps like no other single species, this plant has the potential to help reverse multiple major environmental problems and provide for many unmet human needs.”

What are the health benefits of moringa? To date, over 1,300 studies, articles and reports have focused on moringa benefits, finding that it contains compounds that are especially important in parts of the world where disease outbreak and nutritional deficiencies are common.

Research shows that just about every part of the moringa plant can be utilized in some way, whether it’s to make a potent antioxidant tea or produce an oily substance that lubricates and nourishes the skin.

Moringa (moringa oleifera) is known by over 100 names in different languages around the world. This easy-to-grow tropical plant species, native to the Himalayan mountains and parts of India and Africa, comes packed with over 90 protective compounds, including isothiocyanates, flavonoids and phenolic acids.

There are actually believed to be at least a dozen different varieties of the moringa tree, which belong to the plant family Moringaceae. These are fast-growing, tall, leafy plants that produce flowers or pods.

Of all the species, one (moringa oleifera) is by far the most utilized.

Prior to the plant’s effects being demonstrated in scientific studies, it was used extensively in traditional medicine practices like Ayurveda medicine for over 4,000 years.

Moringa has gained a reputation for fighting inflammation and combating various effects of malnutrition and aging, earning the nickname “the miracle plant.”

Benefits of moringa include helping treat a wide variety of conditions, such as:

Moringa is a unique plant because almost all parts of it — leaves, seeds, flowers/pods, stem and roots — can be used as a source for nutrition and other medicinal properties.

The most popular medicinal use of this plant involves drying and grinding down moringa leaves, where most of the antioxidants are found.

Studies have revealed that moringa powder is loaded with phytochemicals, protein, calcium, beta-carotene, vitamin C and potassium. Because it provides a concentrated source of vitamin A, it’s given to thousands of children in third-world countries every year suffering from life-threatening vitamin A deficiency, which is linked to impaired immune function.

Aside from the valuable leaves, the pods of the moringa tree also contain seeds that hold a healing type of oil. Oil from moringa seeds can be used to cook with or put directly onto the surface of the body.

According to Kuli Kuli, an organization that harvests moringa plants in Africa, gram for gram, the plant contains:

Moringa oleifera seems to have similar abilities as certain conventional drugs, only it doesn’t pose the same level of risk for experiencing side effects.

According to a report published in the Asian Pacific Journal of Cancer Prevention, it contains a mix of essential amino acids (the building blocks of proteins), carotenoid phytonutrients (the same kinds found in plants like carrots and tomatoes), antioxidants, such as quercetin, and natural antibacterial compounds that work in the same way as many anti-inflammatory drugs.

Studies have shown that these compounds are protective of the heart, natural circulatory stimulants, and possess antitumor, anti-epileptic, anti-ulcer, antispasmodic, antihypertensive and antidiabetic effects.

Moringa powder is high in several powerful anti-aging compounds that lower the effects of free radicals, oxidative stress and inflammation. These are associated with a reduced risk for chronic diseases, such as stomach, lung or colon cancer; diabetes; hypertension; and age-related eye disorders.

2. Balances Hormones and Slows the Effects of Aging

A 2014 study published in the Journal of Food Science and Technology tested the effects of moringa (sometimes also called “drumstick”) along with amaranth leaves (Amaranthus tricolor) on levels of inflammation and oxidative stress in menopausal adult women. Researchers wanted to investigate if these superfoods could help slow the effects of aging by balancing hormones naturally.

Levels of antioxidant status, including serum retinol, serum ascorbic acid, glutathione peroxidase, superoxide dismutase and malondialdehyde, were analyzed before and after supplementation, along with fasting blood glucose and haemoglobin levels.

Results showed that supplementing with moringa and amaranth caused significant increases in antioxidant status along with significant decreases in markers of oxidative stress. Better fasting blood glucose control and positive increases in haemoglobin were also found.

Can moringa help you sexually?  There’s some evidence it may boost libido and work like a natural birth control compound, according to some animal studies.

Although it’s historically been used as a natural aphrodisiac, it actually seems to help reduce rates of conception. That said, it can boost the immune system during pregnancy and also increase breast milk production/lactation, according to some studies.

Due to its anti-inflammatory properties, moringa has been used in ancient systems of medicine, such as Ayurveda, to prevent or treat stomach ulcers, liver disease, kidney damage, fungal or yeast infections (such as candida), digestive complaints, and infections.

A common use of moringa oil is helping to boost liver function, therefore detoxifying the body of harmful substances, such as heavy metal toxins. It might also be capable of helping fight kidney stones, urinary tract infections, constipation, fluid retention/edema and diarrhea.

Moringa contains a type of acid called chlorogenic acid, which has been shown to help control blood sugar levels and allow cells to take up or release glucose (sugar) as needed. This gives it natural antidiabetic and hormone-balancing properties.

Aside from chloregnic acid, compounds called isothiocyanates that are present in moringa leaf have also been tied to natural protection against diabetes.

A study that appeared in the International Journal of Food Science Technology found that this plant had positive effects on blood sugar control and insulin levels in patients with diabetes when eaten as part of a high-carbohydrate meal.

High levels of immunoglobulin (IgA, IgG), fasting blood sugar and glycosylated hemoglobin (HbA1c) — three markers seen in diabetics — were also found to decrease as a result of moringa given to rats with diabetes.

Can moringa help you lose weight? Because it can improve insulin sensitivity and hormone balance, it may offer some advantages to those following a weight loss plan.

5. Protects and Nourishes the Skin

Moringa contains natural antibacterial, antifungal and antiviral compounds that protect the skin from various forms of infections. Some of the common ways it is used on the skin include reducing athlete’s foot, eliminating odors, reducing inflammation associated with acne breakouts, treating pockets of infection or abscesses, getting rid of dandruff, fighting gum disease (gingivitis), and helping heal bites, burns, viral warts and wounds.

The oil is applied directly to the skin as a drying, astringent agent used to kill bacteria, but at the same time, when used regularly it’s known to act like a lubricant and hydrate the skin by restoring its natural moisture barrier. It’s a common ingredient used in food manufacturing and perfumes because it prevents spoilage by killing bacteria — plus it has a pleasant smell and reduces odors.

As a high-protein food and a rich source of the amino acid tryptophan, moringa supports neurotransmitter functions, including those that produce the “feel good” hormone serotonin.

7. Good for the Environment (Water and Topsoil)

A noteworthy characteristic of the moringa plant is that it’s capable of growing in depleted or dry soils where many other types of beneficial plants or trees cannot survive. This is precisely why certain undernourished populations living in third-world countries, such as Somalia or India, have benefited from it during times of famine.

Aside from providing important nutrients, it is used to help restore fertile soil, aid in forest restoration efforts and filter water.

One interesting use of the seeds is for water purification. Combining moringa with water helps impurities cling to the seeds so they can be removed, leaving behind better quality water that’s lower in toxins.

Salt also seems to bind to moringa, which is beneficial for producing fresh-tasting water.

Some studies have shown that 0.2 grams of ground moringa seed can turn one liter of contaminated water into safe drinking water. This is due to the coagulating actions of certain ingredients in the plant that absorb bacteria.

What are the side effects of taking moringa? Because it’s completely natural and free from chemical additives (when you buy a pure, high-quality brand), when taken by mouth or used on the skin it seems to be very well-tolerated.

Moringa side effects are still possible and may include:

Leaves, fruit, oil and seeds from the moringa tree have been consumed safely for centuries, but today there are various forms of supplements or extracts sold, so it’s important to buy the purest kind you can find and to read ingredient labels carefully.

During pregnancy or when breastfeeding, it’s best to avoid moringa extract, root or high doses of supplements since not enough research has been done to show it’s safe. It’s possible that chemicals within the plant’s root, bark and flowers can lead to contractions of the uterus, which can cause complications during pregnancy.

How to Use It

As you can probably tell by now, this plant can be used in many different ways in order to utilize all the available moringa benefits. Because of the long transport time needed to ship moringa from parts of Africa or Asia where it’s grown, in the U.S. it’s usually sold in powder or capsule form, which prolongs its shelf life.

An interesting characteristic of moringa? It’s said to taste like a mix between horseradish and asparagus. It might not have the most appealing flavor, but it’s a supplement with one of the the richest supplies of vital nutrients in the world.

There’s no recommended or required dosage of moringa at this time since it’s only an herbal supplement and not an essential nutrient. That said, there’s some evidence that the optimum dose for humans has been calculated to be 29 milligrams per kilogram of body weight.

It’s recommended that you start by taking half a teaspoon of dried moringa orally per day for three to five days, increasing your intake slowly over two weeks as you get acclimated to its effects.

Most people choose to take moringa every several days but not every single day for long duration of time, since it can can cause laxative effects and an upset stomach when overused.

Here are the most common ways to use moringa to get the best moringa benefits possible:

Both of these superfoods have several things in common: 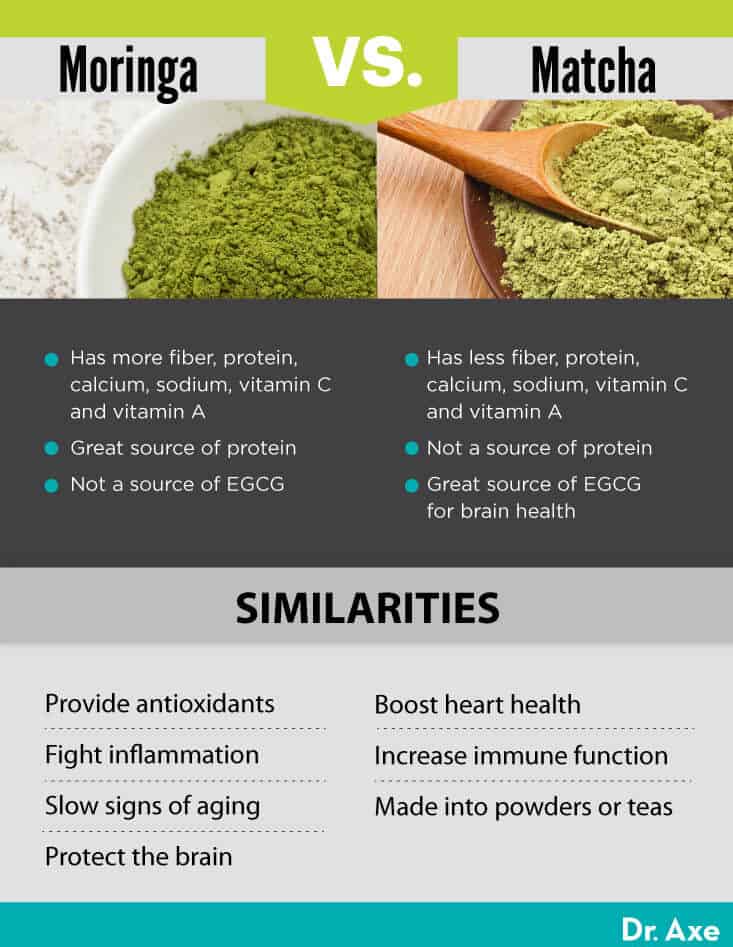