Have you ever eaten at a sushi restaurant or ordered Chinese takeout? If so, then there’s a pretty good chance you’ve tried imitation crab meat at one point or another, regardless of whether you knew it or not.

Thanks to its versatility, ease of preparation and budget-friendly benefits, imitation crab has become a prominent ingredient featured in restaurants, grocery stores and home kitchens alike.

Contrary to popular belief, imitation crab meat is not actually vegan — or even vegetarian.

Even more surprising, it often doesn’t even contain any crab meat at all and actually contains more starch and carbohydrates than protein.

So what is imitation crab made of, and should you reconsider this controversial ingredient?

Let’s take a look at what’s really in your favorite sushi rolls and why you may want to think twice about your takeout order.

What Is Imitation Crab Meat? Why Was It Created?

The primary ingredient of imitation crab is a type of gel-like substance known as kani surimi, which is made by grinding different types of fish into a thick paste, then adding in starch, fillers, artificial flavoring and food coloring to mimic the taste, texture and appearance of real crab.

Imitation crab was first produced and patented by Sugiyo, a Japanese company, in 1973. Just one year later, the product began gaining traction as other companies began making imitation crab in its popular crab stick form.

A few years later in 1976, Sugiyo began working with a U.S.-based company to introduce imitation crab to the United States along with the rest of the world.

Today, imitation crab meat is widely consumed across the globe and has become a staple ingredient in many dishes.

It’s estimated that 2 million to 3 million tons of fish around the world, or about 2 percent to 3 percent of the world fisheries supply, are used to produce surimi-based products, such as imitation crab meat.

Pollock is the most common fish used to produce imitation crab meat due to its lack of flavor, abundance and ready availability, but other types of fish like cod, mackerel and barracuda are sometimes used as well.

Because of its sparse nutrient profile and long list of additives, many people consider it to be the seafood equivalent of the hot dog, made of fish parts and questionable ingredients that have been ground up into a cheap, highly processed convenience food.

Still, it remains a common ingredient in many types of cuisine, favored for its versatility, low cost and ease of preparation.

In fact, because it is significantly cheaper than regular crab meat, it has become a popular choice for everyone from food manufacturers to restaurants and consumers.

Imitation crab nutrition is relatively low in calories but contains some protein, carbohydrates and sodium.

Compared to real crab, imitation crab is significantly lower in many nutrients, including protein, vitamin B12 and selenium. Crab also provides a much wider range of nutrition than imitation crab meat.

In addition to the nutrients listed above, cooked crab also contains some thiamine, vitamin A, pantothenic acid, calcium, potassium and manganese.

So is imitation crab good for you?

Imitation crab is a popular choice among consumers and food manufacturers alike because it’s cheap to purchase and produce.

Compared to fresh crab meat, it’s also more convenient, easy to use and widely available at most major retailers around the country.

Plus, it’s very versatile. Not only is it a good addition to salads, sushi rolls and stuffed mushrooms, but it’s also commonly added to other imitation crab meat recipes, like dips, cakes and pasta dishes.

Take a look at the imitation crab nutrition facts and there are a few benefits over fresh crab meat as well. Not only is each serving lower in imitation crab calories, but it’s also a bit lower in sodium.

It’s also generally made from pulverized fish like pollock, which means that certain brands may also be a safe alternative to crab meat for those with a shellfish allergy.

So is imitation crab healthy, or is it nothing more than a “fake food” with potentially dangerous side effects?

Nutritionally speaking, imitation crab is slightly lower in calories and sodium than fresh crab. However, it’s also lower in plenty of beneficial nutrients, such as protein, vitamin B12 and selenium.

Real crab meat also contains a much more diverse nutrition profile and packs in a wider range of important vitamins and minerals in each serving.

Imitation crab is also loaded with harmful food additives that can trigger conditions like leaky gut and inflammation.

It can also be a hidden source of potential allergens like gluten. For those who are sensitive to gluten or have celiac disease, eating gluten can cause symptoms like abdominal pain, diarrhea, bloating and fatigue.

Long term, eating even small amounts of gluten can cause increased intestinal permeability, or leaky gut, in those who are sensitive.

Manufacturers also throw in other not-so-great ingredients like sugar, starch and vegetable oils to help the final product hold its shape. Thanks to these extra ingredients, there are much more carbs in imitation crab than real crab meat, containing about the same amount of carbs as a slice of white bread in each serving.

And because it lacks fiber to slow the absorption of sugar in the bloodstream, eating too much can cause blood sugar to spike and then quickly crash.

Some brands also add in monosodium glutamate (MSG) to amp up the flavor of imitation crab meat. MSG is a food additive that’s used to enhance the taste of savory dishes, and it is often found in Asian cuisines as well as many types of processed foods.

However, many people are sensitive to MSG, reporting symptoms like headaches, muscle tightness, weakness and numbness/tingling after consumption. That’s partly why it’s often considered one of the worst ingredients around.

If you can avoid it, cutting this highly processed ingredient from your diet along with all of the additives it contains can definitely be beneficial for your health.

Instead, swap imitation crab for a healthy protein foods or one of the nutritious alternatives listed below to enjoy your favorite recipes without the fish paste and fillers.

How to Use It and Healthier Alternatives (and Recipes)

Many people are surprised to learn that this popular product actually comes fully cooked, so there’s no need to fire up the stove.

However, there are plenty of options for how to cook imitation crab sticks if you do decide to enjoy it hot.

It’s generally steamed, sautéed or fried, and then added to recipes with imitation crab like cakes, tarts, chowders and stews.

You can also blend it up with some spices and cream cheese to make imitation crab dip or chop it into chunks and add it raw to an imitation crab salad.

Ready to nix the imitation crab but not quite ready to cut out the California rolls and crab cakes? Fortunately, there are plenty of nutrient-rich, whole food substitutes that you can easily use in place of imitation crab in your favorite recipes.

Here are a few of the best alternatives:

Imitation crab is typically made using a base of cooked pollock fish, so it’s no wonder subbing in the real stuff can be a healthier alternative in some recipes.

Pollock has a mild taste that can easily take on whatever seasonings you use, and it’s also jam-packed with protein, vitamin B12 and selenium, plus many other important nutrients.

With a crunchy and mild flavor, hearts of palm have a texture and taste that can easily mimic crab meat with a bit of seasoning.

They’re also low in calories but rich in fiber, manganese and iron.

Use this flavorful veggie to whip up crab-less cakes, chowders, stews and salads.

This massive tree fruit makes the perfect vegan meat replacement because it has the unique ability to take on pretty much any flavor.

Jackfruit is available fresh and canned and can be incorporated into a variety of meatless dishes.

A serving of jackfruit provides plenty of vitamin C, potassium, magnesium and and manganese.

Swap it in for crab in recipes like crab cakes, crab rangoons or an imitation crab salad.

They’re super high in fiber and can help promote better digestive health to keep you regular.

Artichoke hearts are available fresh, canned or even marinated and make a flavorful substitute for crab in dips, cakes and tarts.

Believed to possess potent properties that can help protect the brain, heart and liver, lion’s mane mushroom can have a powerful effect on your health.

Not only does this medicinal mushroom boast a long list of impressive health benefits, but it also has a taste and texture similar to crab meat.

Simply sauté or steam it, and then add it to crab cakes, soups or pasta dishes in place of imitation crab to upgrade the health benefits of your dish. 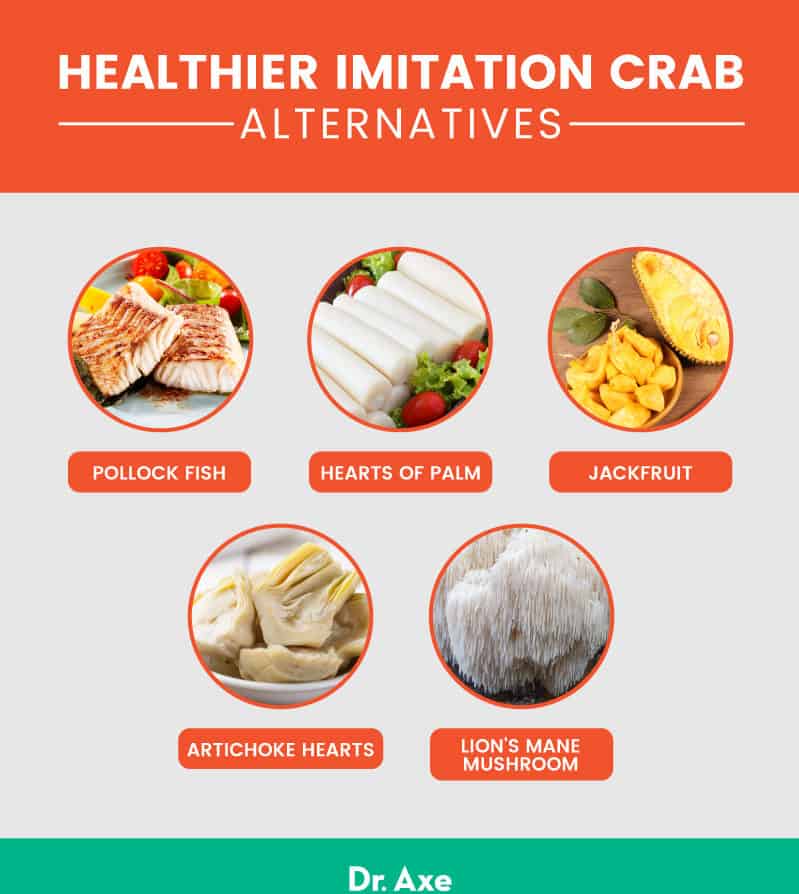 Despite its health drawbacks, eating the occasional crab rangoon or crab cake made from imitation crab meat is generally safe, although making it a regular part of your diet is not recommended.

However, there are some people who should avoid this ingredient altogether.

Imitation crab meat is not suitable for those on a vegan or vegetarian diet as it is made from fish.

Those who have celiac disease or a sensitivity to gluten should also not eat imitation crab, as it contains starch and may cause negative side effects.

If you are sensitive to MSG, you should read the label carefully to make sure it’s not included in the brand you’re purchasing.

Look for phrases like monosodium glutamate, glutamic acid or glutamate on the list of ingredients, all of which indicate that MSG has been added.

Additionally, some brands may use small amounts of real crab to add flavor. If you have a shellfish allergy, be sure to check the label to prevent an allergic reaction.

However, due to the high amount of additives found in imitation crab, it’s best to minimize your intake and check with your doctor before consuming if you’re pregnant.