You’ve undoubtedly heard of chlorophyll, and you probably know that plants couldn’t live without it. Still, you may wonder: What is chlorophyll exactly, and are there chlorophyll benefits for humans?

As we learned back in science class, chlorophyll is a type of plant pigment responsible for the absorption of light in the process of photosynthesis, which creates energy.

Why is it important for humans beyond sustaining plant life? Turns out, chlorophyll is linked to natural cancer prevention, blocks carcinogenic effects within the body and protects DNA from damage caused by toxic molds like aflatoxin — very similar to way in which chlorophyll-rich chlorella has anticancer properties.

It also holds major promise as a natural weight-loss ingredient, and those are just some of the major chlorophyll benefits for human health, all of which help cleanse the body and allow it to function at an optimal level.

Chlorophyll is the green substance in plants that makes it possible for them to make food from carbon dioxide and water. It’s found in all green plants, including leafy greens and other veggies we commonly eat, plus certain types of algae or bacteria.

Plants and algae use chlorophyll to trap light from the sun that’s needed for photosynthesis, which is why chlorophyll is considered a “chelate.” In fact, it’s considered the single most important chelator found in nature, since it gives plants energy, which then give us energy.

There are two main forms of chlorophyll found in nature: chlorophyll-a and chlorophyll-b. There is a small difference between the two types, basically that each absorbs light from the sun at slightly different wavelengths.

In natural plants containing chlorophyll, there is a ratio of 3:1 cholorophyll-a (a bluish-black solid) to cholorophyll-b (a dark green solid), which both work together to reflect the dark green pigment that’s visible to the human eye.

While chlorophyll is totally natural, a similar semi-synthetic mixture called chlorophyllin is made in laboratories and used in supplements, such as those marketed as “liquid chlorophyll.” These supplements have been in existence for more than 50 years and are commonly used to treat skin wounds, body odor, digestive problems and other health concerns with practically no dangers at all.

Studies have found that chlorophyll and liquid chlorophyllin can bind to potential carcinogens and interfere with how they’re absorbed within the human gastrointestinal track. This helps stop them from circulating throughout the body and reaching susceptible tissues, such as those within the joints or heart.

Reports by the Linus Pauling Institute at Oregon State University show that chlorophyllin and chlorophyll were equally effective at blocking uptake of aflatoxin-B1 in humans and decreasing biomarkers of aflatoxin-induced DNA damage. Findings from several other animal and human studies suggest that these effects help lower the risk for certain types of cancers, including liver and colon cancer.

The mechanism by which chlorophyll decreases the risk for cancer development and cleanses the liver is by interfering with the metabolism of chemicals’ procarcinogen, which must first be metabolized in order to damage DNA. Within the human body, enzymes called cytochrome P450 activate procarcinogens and turn them into active carcinogens, which go on to attack healthy cells.

This means inhibiting their effects can help stop the process of chemically induced cancers.

Diets that are high in red meat and low in green vegetables are associated with increased colon cancer risk. This is sometimes blamed on toxins released from cooked meat, including one called haem, which increases colonic cytotoxicity and epithelial cell proliferation. Recently, some research suggests that human colon cancer cells experience “cell arrest” when exposed to chlorophyllin due to inhibition of ribonucleotide reductase activity, which helps protect DNA and boosts synthesis and repair.

This is why in recent years ribonucleotide reductase activity has come under investigation for naturally treating cancer and its many side effects.

In 2005, the Wageningen Centre for Food Sciences in the Netherlands studied whether green vegetables could inhibit the unfavorable properties of haem within the colon. Rats were fed either a control diet high in haem or a similar diet supplemented with chlorophyll for 14 days.

The results showed that the rats consuming haem experienced about eight times the amount of cytotoxicity of the colon compared to the beginning of the study. The rats given chlorophyll supplements were significantly protected from formation of the cytotoxic haem metabolites, which made the researchers conclude that green vegetables may decrease colon cancer risk because chlorophyll prevents the cytotoxic and hyperproliferative colonic effects of dietary toxins like haem.

Another way by which chlorophyll might protect healthy cells and bodily tissue is by increasing phase II biotransformation enzymes. These promote optimal liver health and therefore the body’s natural elimination of potentially harmful toxins.

Some early studies involving animals indicate that chlorophyllin may reduce the risk for aflatoxin-induced liver damage or liver cancer by increasing activity of these phase II enzymes and removing bodily toxins.

Aflatoxin-B1 (AFB1) is associated with increased risk of hepatocellular carcinoma and liver cancer because it’s metabolized to a carcinogen that causes cellular mutations. In animal studies, supplementing with chlorophyllin at the same time as consuming high amounts of dietary AFB1 significantly reduced the amount of DNA damage that developed.

This is especially important for people who consume high amounts of grains or legumes, such as those living in underdeveloped nations.

In China, a randomized, placebo-controlled intervention trial involving 180 adults with a high risk of hepatocellular carcinoma and chronic hepatitis B infection gave participants either 100 milligrams of chlorophyllin or a placebo before meals three times daily. After 16 weeks of taking chlorophyllin, AFB1 levels dropped an average of 55 percent more in those taking chlorophyllin compared to those taking the placebo, suggesting chlorophyll supports liver health in a useful and safe way.

Chlorophyllin seems to slow the rate at which harmful bacteria reproduce, making it beneficial for wound healing and preventing infections. Since about the 1940s, cholorphyllin has been added to certain ointments used to heal persistent open wounds in humans, such as a vascular ulcer and pressure ulcer.

It’s been found to help lower inflammation caused by injuries or wounds, promote healing and even control odors caused by bacteria accumulation.

Another way that chlorophyll improves detoxification is by speeding up waste elimination, balancing fluid levels and reducing cases of constipation. Additionally, preliminary research shows chlorophyll supports metabolism and increases the likelihood of success with weight-loss efforts.

A 2014 study conducted by the Department of Experimental Medical Science at Lund University in Sweden found that chlorophyll supplements taken along with a high-carbohydrate meal decreased feelings of hunger, elevated cholecystokinin levels and helped prevent hypoglycemia in overweight women.

Prior to the study, previous research had shown that chlorophyll, taken in the form of thylakoid supplements, helped balance the release of hormones that make us feel fuller, including cholecystokinin, ghrelin and insulin. While the studies so far have mostly looked at the weight-loss effects of chlorophyll taken by rodents, results suggest that it might help naturally suppress food intake and prevent body weight gain in humans too.

The small study done by Lund University observed 20 overweight females eating meals on three different occasions. The test meals consisted of a high-carbohydrate Swedish breakfast, taken with or without addition of chlorophyll in the form of thylakoids.

Thylakoids helped suppress hunger and increased secretion of satiety hormones following food intake, preventing compensational eating later in the day — which we would expect over time to help with weight loss and appetite control.

There’s some evidence that chlorophyll boosts skin health due its antiviral properties, allowing it to help stop the development of cold sores within the mouth or genital area caused by the herpes simplex virus. Some early studies have found that when chlorophyll-containing ointment or cream is applied to skin, it helps reduce the number of sores that appear and speeds up healing time, making it a natural herpes treatment.

Chlorophyll might also be able to protect the skin from shingles, reducing symptoms like painful sores, plus lower the risk for skin cancer. Injecting chlorophyll directly into the skin or applying it via lotion has been found to help reduce the recurrence of cancerous cells in people with basal cell carcinoma, a very common type of skin cancer.

The Tropical Botanic Garden and Research Institute in India suggests that chlorophyll from fresh green leaves has potent anti-inflammatory activities against dangerous bacteria and other environmental toxins.

It helps turn off a pro-inflammatory cytokine called lipopolysaccharide-induced TNF-α, making it a promising treatment option for inflammation and related chronic diseases that conventional medicine has failed to control.

Because they completely natural, chlorophyll and chlorophyllin are not known to be toxic. In fact, over the past 50 years there have been practically no toxic effects attributed to their consumption, even in people with weak immune systems, such as those healing from cancer.

In pregnant women, chlorophyll or chlorophyllin supplements haven’t been researched very much, so at this time it’s not recommended that they’re used during pregnancy or when breast-feeding.

Use chlorophyll supplements carefully if you take photosensitive drugs or are especially prone to sunburns, blistering or rashes when you’re exposed to UV light.

What’s the best way to detox using chlorophyll? The very best sources of chlorophyll found on the planet are green vegetables and algae.

Here are some of the top food sources to incorporate into your diet to experience all of the chlorophyll advantages. 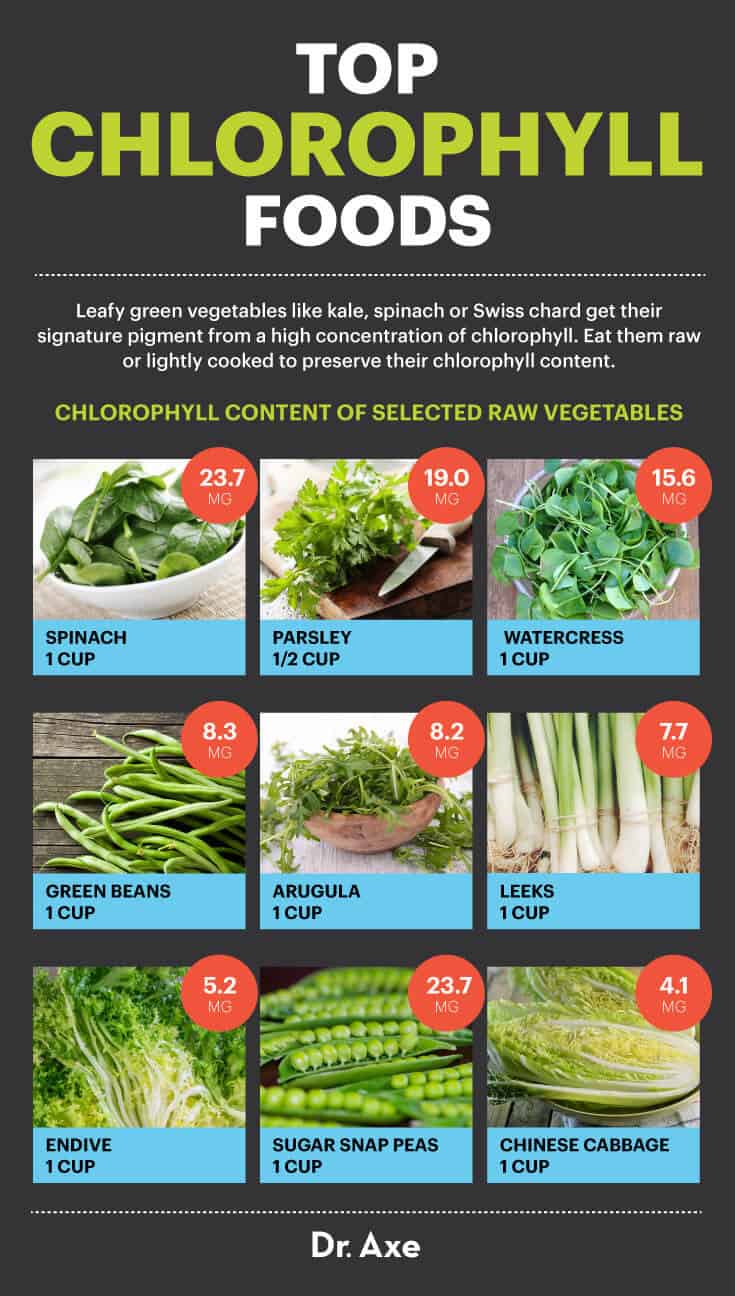 In addition to eating green-colored foods that provide chlorophyll, there are also supplements that provide the beneficial properties of the plant pigment. Supplements and recommended doses include the following: